One might think that the answer is a simple “no, they’re not”. But for the love of all those sceptical, ignorant (used in the sense of people who do not know), it would be better to articulate the answer a little bit.

Here is an extract from the Joint Council for the Welfare of Immigrants website, commenting one headline of the Daily Express:

One would imagine Daily Express readers would have bored of it by now, but the editor obviously thinks the fear has not been instilled deeply enough, the intolerance inflamed high enough or the xenophobia whipped up adequately. Today (19 February) saw the twentieth article about the coming ‘flood’ of immigrants from Romania and/or Bulgaria at the beginning of 2014. Given that we’re a year away from the restrictions on working and movement being lifted, it promises to be a grim year for Express readers.

Most articles are accompanied by pictures of grubby horse and carts, grubby children or of people walking through grubby streets carrying plastic bags. It’s a pretty desperate picture the paper is printing.

And here is the incriminated headline: 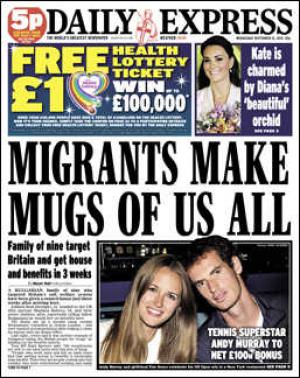 The Daily Express is an award-winning lie teller, read by more than one million people. Yes, that’s right. One million people last March were actually spending money on it. More than this might have read the headlines.

But let’s go back to the question. Are migrants stealing jobs?

That’s an old query, an old stereotype, based on some misconceptions. Firstly it might be based on the assumption that the majority of migrants are moving outside of their countries to get to Italy, UK, Greece or wherever.

Well, the Economist Group released this interesting video. Although the information go back to almost ten years ago, an important information given is that the majority of migrants actually moved within their region. For example, most of Africans moved to neighbouring countries and not Western regions.

The second assumption so dear to my birth country as well as Greece and sometimes US, is that migrants are not doing good to economy. Which translated into “indigenous” workers words reads like “they’re stealing jobs!” The case is different from country to country, though the assumption remains incorrect.

In the US, many studies confirmed migrants are actually boosting the local economy. The American Immigration Policy Center reports:

Immigrants are not the cause of unemployment in the United States. Empirical research has demonstrated repeatedly that there is no correlation between immigration and unemployment. In fact, immigrants—including the unauthorized—create jobs through their purchasing power and their entrepreneurship, buying goods and services from U.S. businesses and creating their own businesses, both of which sustain U.S. jobs. The presence of new immigrant workers and consumers in an area also spurs the expansion of businesses, which creates new jobs. In addition, immigrants and native-born workers are usually not competing in the same job markets because they tend to have different levels of education, work in different occupations, specialize in different tasks, and live in different places. Because they complement each other in the labor market rather than compete, immigrants increase the productivity—and the wages—of native-born workers.

Britain is a special case though, apparently there the economic impacts of migrants really depends on the skills they have. Being 12% of the workforce, migrants bring a low economic contribution said the UK Parliamentary Committee on Economic Affairs five years ago.

The Migration Observatory of the University of Oxford noted the same in 2003/2004. It said:

But this was sometimes ago. In 2011 the British newspaper The Independent released an article saying that the goal of British Prime Minister David Cameron to reduce the number of migrants would only damage the UK economy based on research of the  Office for Budget Responsibility (OBR):

Ministers will not reduce average annual immigration down to the “tens of thousands” over the course of this parliament according to the OBR’s projections. Instead, net inward migration to Britain will remain at an average of 140,000 a year until 2016, it says, despite repeated promises from Conservative ministers that they will reduce immigration flows to substantially below these levels.

If ministers were to succeed in reducing immigration down to their target, the UK’s growth would be damaged, the OBR’s economists believe – acknowledging the role that immigration plays in Britain’s economic health. The forecast is embarrassing for David Cameron and the Home Secretary, Theresa May, who have repeatedly insisted that the Tory manifesto pledge will be met.

The OBR has also pointed out that falls in immigration would have economic implications. Reductions in net immigration would have a negative impact on UK growth, the fiscal watchdog said in November last year. “If migrants have a similar employment rate and level of productivity to the existing average, a reduction or increase in population growth of 0.1 per cent would translate one-for-one to a reduction or increase in trend growth of 0.1 per cent respectively.”

Again, the situation varies from country to country. But the lesson here is that there are far more issues to understand before pointing the finger to migrants and use them as scapegoats.